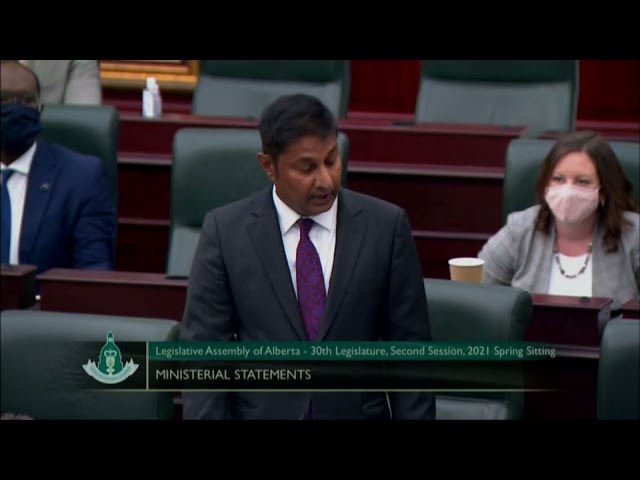 Indian Origin Canadian Minister Prasad Panda Delivered Keynote On 75th Indian Independence Anniversary in Alberta’s Legislature wishing India good luck during these tough times. Since the legislature in Alberta is going on a recess until October, he sent his wishes to India to stand brave and strong. Prasad is currently serving as the Minister for Infrastructure in the Executive Council of Alberta. His keynote can be seen below.

To learn more about Mr. Panda, you can check out his social media handles below
Website: https://www.prasadpanda.ca/
Facebook: https://www.facebook.com/PrasadPandaYYC

Mr. Speaker and hon. members, namaste. I’m truly grateful to Albertans, who elected me twice to this Legislature and gave my family every opportunity to pursue our Canadian dream. Our family loves Alberta, and we will remain loyal to Alberta forever. Every day I pray for the well-being of Albertans by saying Sarve Jano Sukhino Bhavanthu, which means: let everybody live happily and peacefully.

Today from the floor of this House, or, as I like to call it, our temple of democracy, and alongside my friend the minister of culture and multiculturalism, I want to speak about the 75-weeklong celebrations that have begun to mark the 75th anniversary of the world’s largest democracy, mere pyare Bharat, my ancestral homeland, India. Vasudhaiva Kutumbakam means: the world is one family. The verse is from the Maha Upanishad, which is engraved in the entrance hall of the parliament of India. It says that everyone who comes into the world is born equal and has an equal right to everything in life, but the success of every individual depends on how we pursue the common good.

Indians believe in unity and diversity. There are many mini Indias within India, and her national anthem, Jana Gana Mana, reflects all regions of Bharat Mata: 28 states and eight union territories. The country has an incredible 22 official languages and dozens of additional dialects. India’s national anthem was in fact penned and put to music by a true Renaissance man, Rabindranath Tagore, who in 1913 became the first man on the continent to win the Nobel prize. Another song of his was adopted by Bangladesh as its national anthem, and he deeply influenced the national anthem of a third country, Sri Lanka.

Most foreigners who have never visited India cannot really gauge how vast and how diverse the country is. The cuisine changes every 200 miles you travel in any direction; the language and the dialect are different every 300 miles; and cultural nuances shift subtly as you travel across the length and breadth of the country. This makes each state in India unique. The culture and history of southern India, where I was born, is quite different from that of the western states, where I migrated to live and work before coming to Canada. Meanwhile in northern India Prasad is a common last name while the name Panda has origins from the east. Through all the uniqueness that one encounters in each region of India, there is an underlying Indianness which binds that country of 1.35 billion people together.

To many foreigners, India is synonymous with the Taj Mahal in Agra; beautiful, snow-clad mountains in Kashmir; and sun, sand, and fun in Goa; but, Mr. Speaker, India is a lot more than that. History tells us that the world’s first republic was born in India. Elected governments ruled principalities like Vaishali, now part of the state of Bihar, a full century before these concepts took root in ancient Athens. Apologies to the Minister of Advanced Education. This political culture remained alive in hundreds of thousands of villages in India, which continued to elect their village leaders and councils through the millennia.

Perhaps that’s why democracy found it so easy to take root in modern India when it gained independence in 1947. Today those village-level democratic functionaries represent the world’s largest group of elected officials. Mr. Speaker, it’s over 3 million elected officials, and by law at least a third of them must be women. Even now the world stares in awe every five years when 880 million people go out and vote to elect a government that becomes responsible for the well-being of one-sixth of humanity. This is the world’s ultimate celebration of democracy. Even as a proud Calgarian I don’t hesitate in saying that that is the greatest show on Earth.

India is a country where people belonging to the Hindu religion make up an overwhelming 80 per cent of the population, yet this is a society that gave rise to four great world religions: Hinduism, of course, as well as Sikhism, Jainism, and Buddhism. Buddhism is the fourth-largest religion in the world. This is the society that hosts what is believed to be the oldest mosque outside the Arabian peninsula, believed to have been built by Muslim merchants in Kerala state in the lifetime of the Prophet. This is a society where St. Thomas the Apostle came with the message of Christ in the first century.

Growing up there, I learned Dharmo Rakshati Rakshitah, which means: those who protect and uphold the dharma are protected by the dharma. In this case dharma implies compassion, love, kindness, respect, forgiveness, truth, peace, nonviolence, and other noble ideals such as protecting religious minorities and providing them
with equal opportunities. Hindustan has sheltered religious refugees from so many different spiritual traditions: Jews fleeing the destruction of the temple of Solomon by the conquering Romans in 70 AD and centuries later the Inquisition in the medieval era, Zoroastrians fleeing persecution in historical Iran, the Dalai Lama fleeing oppression in Tibet, and, as we speak, Sikhs targeted by the terrorism in Afghanistan.

India is an ancient country. It is the only country to have a continuous culture that is 5,000 years old. The world’s oldest living city is in India, Varanasi. Some of the world’s oldest languages and texts are Indian. Yet India is also the world’s youngest nation; 65 per cent of Indians are under 35 years old. It is the effort and education of this population that has made India the back office of the world and one of the world’s leading knowledge economies. While it is vibrant and young, India’s various levels of government need to invest in modern health and education infrastructure and eradicate the red tape that plagues too many institutions and the corruption of too many officials. While no doubt a great nation, few would argue that the country has reached its full potential.

India is rich in human resources, and Alberta is rich in natural resources. In the last six years I have worked hard to explore partnership opportunities between Alberta and India and create prosperity for both. Many Indian students pursue their studies in Alberta’s universities and colleges. Recently we have seen Infosys and Mphasis making large investments in Alberta in an endorsement of policies our government is pursuing with Alberta’s recovery plan. I’d like to help our Premier and the minister of jobs and economy in their work on that front, and I’m optimistic that India’s many biotech, pharma tech, agtech, and other info tech companies will soon find reason to invest in Alberta and make
Alberta the Silicon Valley of Canada. There are tremendous synergies that exist between our two countries. I believe that with a little common sense, some hard-nosed business acumen, and political will, we can forge an incredibly strong, mutually beneficial relationship.

On that note I would like to thank the hard-working Indian diaspora who have contributed to enriching both Alberta and Canada. I would like to note that beyond Canada’s borders, the Indian diaspora is also contributing as government and business leaders around the world, notably: the Prime Minister of Portugal, the vice-president of the United States, both the President and Prime Minister of Mauritius, both the President and vice-president of Guyana, the President of Suriname, the deputy Prime Minister of Ireland, many ministers in the U.K., Singapore, Malaysia, Trinidad and Tobago, Guyana, Fiji, New Zealand, South Africa. Mr. Speaker, it would take too long to name them all.

On the business side of things people of Indian ancestry are CEOs of major companies like Microsoft, Google, IBM, ArcelorMittal, FedEx. The companies these CEOs manage trillions of dollars. Again, it would take too long to name them all, but I will table that at a later time.

Mr. Speaker, as we watch the terrible devastation that has been wrought by the pandemic in India, I urge them to invest in hospitals, schools, universities, railways, roads, ports, and other vital infrastructure that will allow them to respond to the growing needs of their population. Our two countries will continue to be great trading partners, tied together by our mutual economic benefit and shared culture. Happy 75th birthday, India.