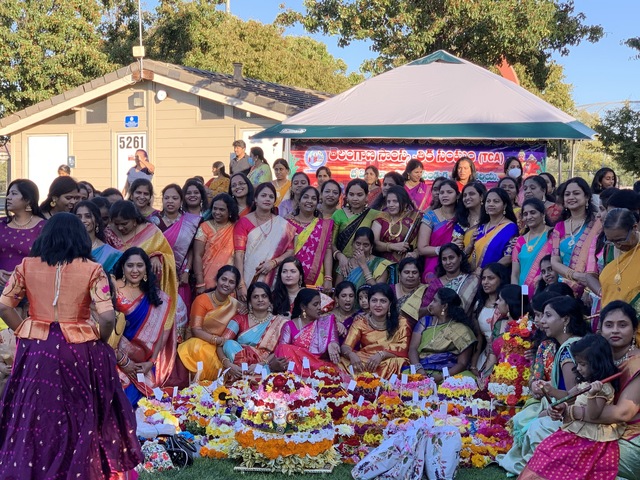 At the outset on behalf of Telangana Cultural Association(www.telanganaculture.org) we wish all Telugu readers a great Bathukamma and Dussehra festival.

The month of October, 2 months before the start of the holiday season in the UNITED States, is a festive month for The American Telugu people, especially the people of Telangana. Because there are two big festivals in these months. These two festivals are at least fifteen days on the other side and on the other side. Everything is filled with festive celebrations and family uproar.

First for Telangana, then for all Telugupeople, nowadays Indians are introduced to everyone in Kakoonda America as the Festival of Flowers and creates a pleasant festive atmosphere, and nowadays there is no Telugu company in america that is not excited to celebrate the Festival of Bathukada or not as exaggerated accuracy.

Telangana pravasis had to work hard in the first days to celebrate this festival today and had to face many humiliations, and the efforts of telangana expatriates who brought to life all the sufferings of Bathukada are worth yoning today. It is not surprising that in the beginning, it was a Shudra festival and that it was an unholy festival.

Starting in the New Jersey area in 1999-2000, in 2002 2003, Chicago, San Francisco and then Boston, Detroit, Atlanta and Dallas, the festival, which first played with a handful of people, is now proud to grow into thousands of numbers.

The last of these, The Festival of Sadhula Bathukada, falls two days before Dussehra.

With the intention of spreading telangana culture to the universe, the festival of Bathukada is intended to make our culture unique to our well generations in the United States
Telangana Development Forum, Telangana NRI Forum and Telangana Cultural Association are important among the first American associations born, and special institutions have been established for Telangana in mega cities like Dallas and Atlanta Detroit and the festival has been given importance.

Many stories are popular behind the Festival of Bathukada. This is the most important story of them. A girl committed suicide because she could not bear the atrocities of the landlords. Then all the people of the town blessed her with ‘Bathukada’. Since then, ‘Bathukada’ has become popular as a festival for women, praising the girl and worshipping Gowram. During the ‘Bathukada’ ceremony, all women plead for gaurum that they should not suffer any harm and that their husband and children should not be harmed.

Another account..
There is also another account of the Festival of Bathukada. Accordingly, the Chola dynasty emperor Dharmangada, who ruled South India, worshipped for the child and his wife Lakshmi Devi had a daughter with the grace of him. She was named Lakshmi. Lakshmi, a toddler, faced many gandas. The parents then named her ‘Bathukada’. Since then, young women have been requested to give a good husband.

Another accountis :.: Another story is that a mother who fainted after killing Mahishasura andall the women are trying to make them conscious with songs. There is a sacrifice called’Bathukada’ who saved a village in Telangana from floods with self-sacrifice. The tradition of ‘Bathukada’ has become a part of the lives of the diaspora.