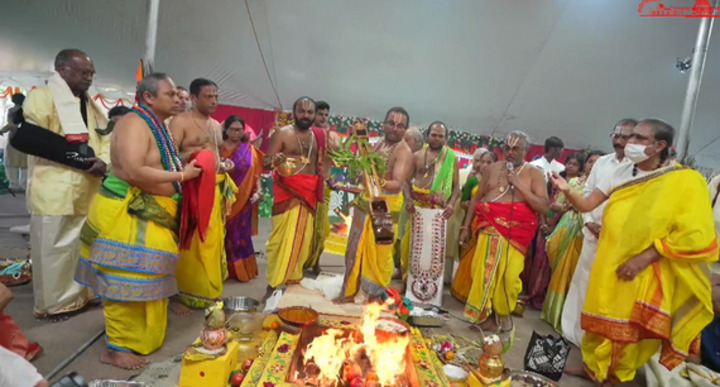 Kalsas for Rajagopura kalasas, after the procession were taken to the top TO DO KUMBHABHISHEKAM. First Lord siva’s kalas were trasferred to the Siva lingam. Sprinkling of holy waters from the Kalasas of the rajagopuram kalasas, amid the chants of Govinda -Govinda was a great divine experience for the devotees. This was followed by Prathama Darshan. First Darshan was done with under 1-10-year old girls. Everyone was able to get the darshan after nearly two months; amid chants of Govinda Govinda.

Holywaters and flowers were sprinkled from atop with roaring chants of Govind Govinda. In the afternoon, a beautiful rath yatra was conducted with various regional dance forms in front of the ratham.In the evening, Srinivasa Kalyanam was conducted in a very traditional atmosphere with great devotee participation.

Day 5 of MahaKumbhabhishekam 2022 concluded with prasadam served on banana leaf. Over 9000 devotees took part in the prasadam meal provided in the afternoon and on Banana leaf in the evening.

HTSL Committe Chairman Gangavarapu Rajinikanth speaking at the concluding session thanked saying “The event was a grand success! It could not have been done without the efforts, commitment, and passion of every volunteer and committee. Without the seamless collaboration and countless hours of hard work, this would not have been possible. Compliments from the devotees have been pouring and the credit goes to each and every one of you- we are looking forward to celebrating and honoring everyone at the appreciation dinner on Sunday!”