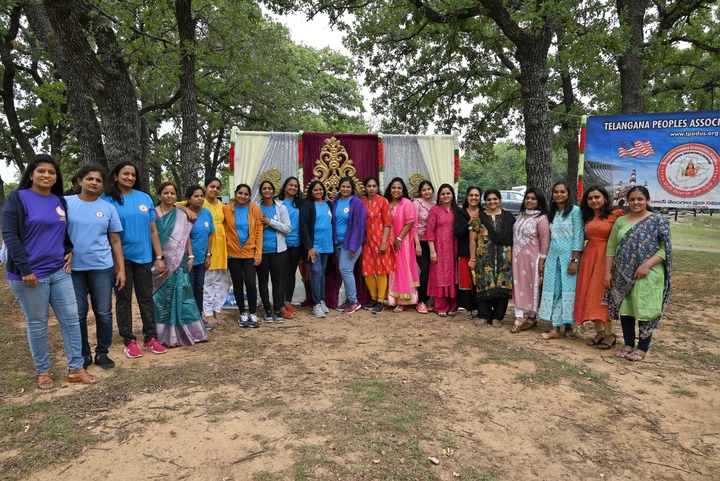 Telangana Peoples Association of Dallas (TPAD) brings Dallas Telugu community together one more time by organizing and unveiling another memorable social event “Vanabhojanalu” at Pilot Knoll Park, Argyl. The event gained significance as this is the first time after the COVID-19 pandemic, that a big event of this size has been conducted in Dallas. As TPAD is known for conducting events on a mega scale, be it Vanabhojanalu or world’s well known Bathukamma Celebration by TPAD or charity activities of Blood Drive and food drive, people came in huge numbers to participate in Vanabhojanalu and like every year, the number of people exceeded expectations. This event symbolizes the celebration of mother nature. With a soft cool breeze from the nearby lake, plenty of shade, the aroma of Telangana food and delicacies cooked onsite by TPAD team along with enjoyable music kept the ambiance perfect for the attendees for the entire day starting at 11:00 AM. The event started off with Ganesh pooja. Soon after, the guests were pleasantly surprised with a Flash Mob dance by TPAD team and a Dappu dance by a local Dappu school “Dallas Parai Kuzhu”. The event was led by Ajay Reddy(Chair of Foundation Committee), Indrani Pancherupula (Chair of BOT), Ramana Lashkar (President) with excellent coordination from Vanabhojanalu Coordinators, Madhavi LokiReddy ( Vice President), and Ling Reddy Alwa. As the preparations were in full swing, Foundation Committee Chair, Ajay Reddy who is known to have mentored the leadership teams of TPAD, constantly monitored and provided guidance to the team. The team found an able and dedicated mentor in Raghuveer Bandaru, who supervised and guided the team with his vast experience of serving TPAD in many positions over the years. In a flawless execution, TAD team cooked authentic Telangana delicacies under the trees and served food through multiple food stations. While Uma Bandaru has supervised entire operations of the on-site kitchen where food was prepared by Madhavi Sunkireddy, Lakshmi Poreddy, Jaya Telakalapalli, Indu Pancharupula, Manjula Todupunoori, Linga Reddy Alva, Ashok Kondala, Ram Annadi, Ram LokiReddy and Vijay Todupunuri for well over 2500 people in 3 hours.

The highlight of the event was spicy chicken barbeque and sweet corn grilled on site by BOT Vice Chair Sudhaakar Kalasani, Karan Poreddy, Rathna Uppala, Raghu Utkoori, Srinivas Annamaneni and Sridhar Vemula. They cooked tasty chicken barbeque for the entire event, serving for over 1000 people. As the food was prepared, the guests were served hot food in 4 stations arranged under the big trees in the park, handling the lunch time rush effortlessly. To serve 2500 people in just 3 hours, needs an army of committed team. The team of Ram Lokireddy, Rupa Kannayyagri, Madhumathi Vysyaraju, Roja Adepu, Swapna Tummapala, Sharath Punreddy, SasiReddy Karri, Renuka Chanumolu, Bala Gangavarapu, Gayathri Giri, Harika Palway, Kalyani Taadimeti, have showed excellent coordination in organizing and serving food, for the entire afternoon. Rao Kalvala, Janakairam Mandadi, Buchi Reddy Goli, Ravikanth Reddy Mamidi (Past President), Pandu Palway (Coordinator), Chandra Police have actively monitored the activities through out the day making sure the planned activities were flowing smoothly providing necessary logistical support and advise. TPAD Advisors- Venu Bhagyanagar, Naresh Sunkireddy, and collaboration team – Sravan Nidiganti, Rohith, Shiva, Ramakrishna Kollipara and Kenya Srinivas have supported the execution of the event. After the lunch and barbeque, Swapna Thummapala conducted games for kids and adults. There were variety of games, including Tug of war, Lemon spoon etc. The event of this magnitude was possible because of the dedicated team members and committed volunteers with six weeks of planning and flawless execution.

Speaking on the occasion, TPAD announced their next big community Bhakthi event, Sri Srinivasa Kalyanam on June 25 th , at Allen Event Center, Allen. TPAD will be leading the event with support from Dallas’s Hindu community. Sri Swamivari Kalyanam will be conducted by priests from Tirumala Tirupathi Devasthanam. Laddu and Vastram for devotees will be brought from Devasthanam and Mahaprasadam will be served. TTD Chairman Y.V Subba Reddy will be the attending the Kalayana Mahotsvam. TPAD leadership conveyed thanks to the sponsors for supporting the event and the entire Telugu community of Dallas for turning up in such a huge number and making it a grand success.