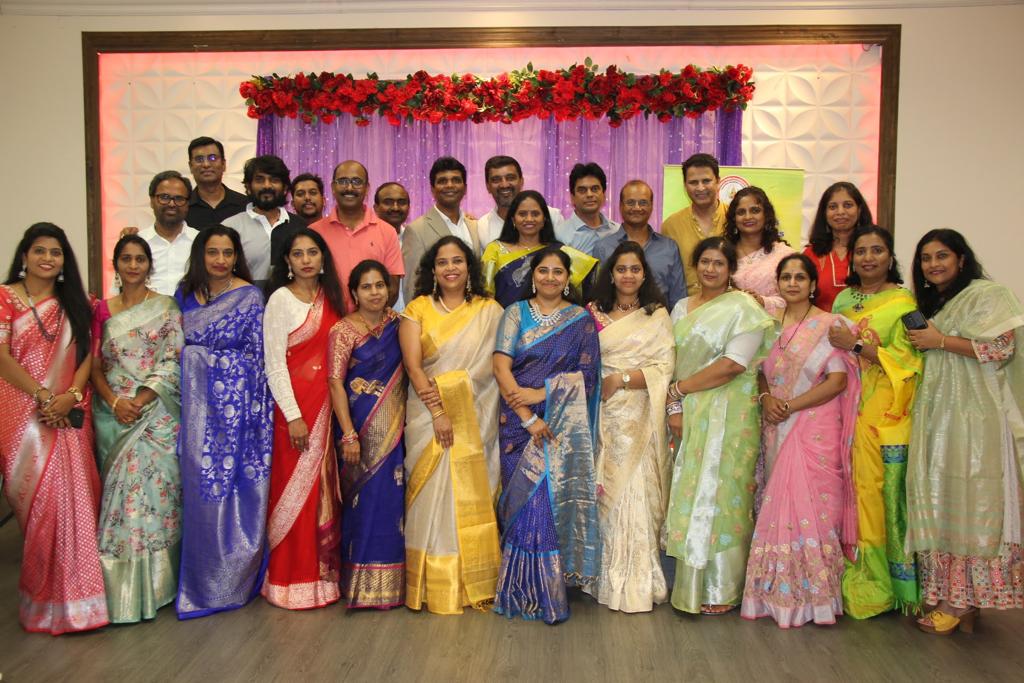 Telangana People’s Association of Dallas (TPAD) has become synonymous to Grand and Biggest Celebration of Bathukamma festival, among Telugu diaspora across the world. It is well known that TPAD has been organizing Bathukamma and Dasara celebrations in Dallas, Texas for the past few years with increasing participation from the local Telugu and Non-Telugu community. As a responsible community organization, TPAD had to tone down the celebrations, yet keeping the tradition of celebrating Bathukamma-Dasara during the past two year of COID-19 pandemic.

As the Pandemic became a history, TPAD has made plans to celebrate Bathukamma in a grand way, to stand up to its reputation and growing expectations of Telugus in Dallas. In a formal announcement of the iconic and much awaited event of Dallas’s Telugu NRIS, TPAD conducted its Kick-off & Fund Raising event, at Shubham event center, Frisco. The event started with welcome note by Madhavi LokiReddy(Vice President) and Swapna Tummapala. The program started with a prayer to lord Ganesha by kids, followed by lighting of diyas by the guests in attendance and TPAD members.

President Ramana Lashkar, BOT Chair Indrani Pancherupula, announced each Bathukamma Committee composing of Chair, CO-Chair, Mentor, Advisor, and members. There was a lot of support for the fund-raising event as local businesses, local community leaders and entrepreneurs pledged support in thousands of dollars. On the Fund Raiser, California’s Billionaire and Healthcare Mogul, Dr.Prem Reddy has been very generous and came forward and pledged to support the event in a big way. Sridhar Reddy Korsapati, President of National Telugu Organization, NATA, along with his team, pledged support for the celebration of Bathukamma and Dasara. After formally releasing the official flyer and promo video, TPAD announced that the celebrations will be held on October 1st, 2022 at Comerica Event Center (Dr Pepper Arena) on Saturday, October 1st, 2022 from 12 PM till midnight.

Because of growing Telugu population in the Metro area of Dallas-Fort Worth, the participation from Telugu population is expected to much higher than the previous records participation of 12,000 people. The stature of the event has gone so high, that people from neighboring states of Oklahoma, Kansas, Arkansas visit to witness the grand celebrations. Foundation Committee Chair and Senior TPAD leader, Ajay Reddy, who has been instrumental in gathering support from local community leaders, thanked the local community leaders and community organizations for their support to TPAD over the past few years. TPAD’s senior leader, Raghuveer Bandaru, who rallied support from local businesses, thanked the local businesses for their support to TPAD and for sponsoring for Bathukamma and Dasara Celebrations over the past few years. Talking to media, Senior TPAD leader Rao Kalvala and Coordinator Pandu Palway said, the indoor event center shields the celebrations from unexpected weather conditions and provides security with controlled entry. TPAD Foundation Committee, Board of Trustees, Advisors and Executive committee members had expressed their sincere appreciation to the media and supporters and expressed their commitment in organizing 2022 Bathukamma-Dasara Sambaralu, in a memorable grand way.

For more about Bathukamma and Dasara celebrations, visit www.tpadus.org