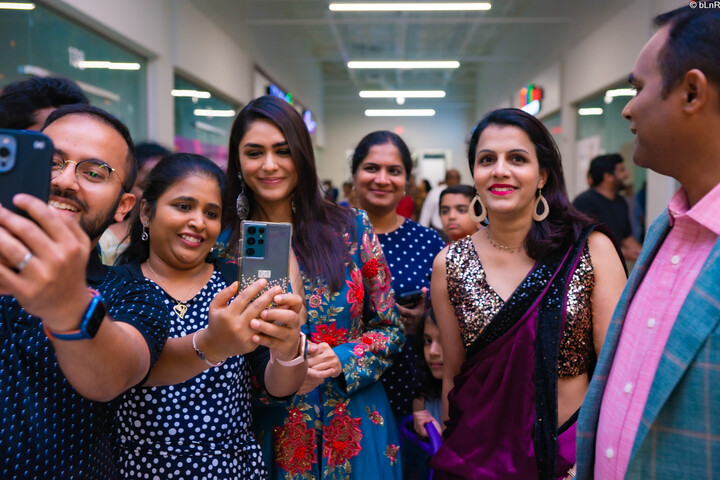 Mall of India Chicago was filled with fans and movie lovers who gathered for a glimpse of their favorite actress Mrunal Thakur, the multi-talented actress who has worked in Marathi, Hindi and Telugu movies, in addition to a number of web series and music albums. The venue was packed and was beaming with excitement of film enthusiasts to meet Mrunal Thakur and to get a chance to interact with her. Thakur started her acting career in TV with Mujhse Kuchh Kehti…Yeh Khamoshiyaan and Kumkum Bhagya and then, moved onto the big screen with Marathi film Vitti Dandu. She started her career in Hindi movies with Love Sonia followed by the blockbuster films like Super 30 and Batla House.

The event celebrated the success of the movie, Sita Ramam which stars Dulquer Salmaan, Mrunal Thakur (in her Telugu debut), Rashmika Mandanna and Sumanth.

The excitement at the Mall of India was especially palpable since Thakur had made her Telugu film debut with Sita Ramam. The event was organized by Mall of India Chicago to celebrate the success of the movie and its amazing lineup of actors which stars Mrunal Thakur as Sita Laksmi and Dilquer Salman. The event hosts, Vinoz Chanamolu and Ajay Sunkara felicitated the celebrity guest and congratulated the entire team on the success of the movie. The Master of the ceremony was Prachi Jaitly who welcomed the actress and the audience and also, coordinated the special question & answer session.

The producer of the movie Aswin Dutt and the lead actor Dulquer Salman joined the celebration online via zoom call and interacted with the audience during the question & answer session. Sita Ramam is a romantic drama film written and directed by Hanu Raghavapudi and produced by Vyjayanthi Movies and Swapna Cinema.

Thakur also launched the official poster of the upcoming 7th Ganesh Mahotsav being celebrated this year at Mall of India from August 30th through September 3rd. Every year thousands of devotees attend the Ganesh Utsav to get blessings and to participate in a variety of activities planned for all age groups. Ganesh Utsav also features kids’ workshops, cultural programs and also gets huge support from dignitaries and elected officials from all over the Midwest every year.

The question-and-answer session was followed by cake cutting to celebrate the excellent box office performance of the movie Sita Ramam. The event was also attended by many community leaders that included representatives from various well known community organizations and culminated with scrumptious dinner enjoyed by film aficionados and children alike and thank you note by the organizers and the announcement of the raffle winners organized by the event sponsors Real People Realty Sairavi Suribhotla and Raj Potluri. Another sponsor of the event was Nawabi Hyderabad House Biryani Place.