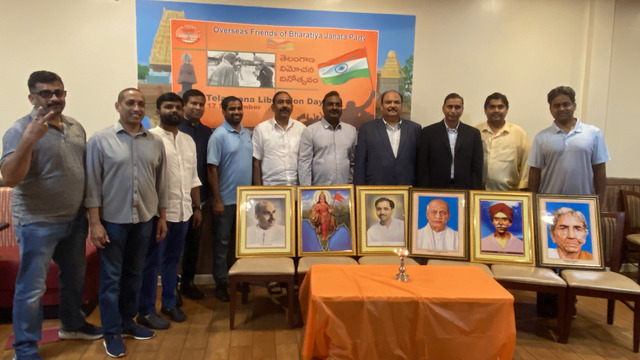 OFBJP had organized the meeting in new Jersey to highlight the prevailing popular demand to celebrate the day of Hyderabad’s merger with the Indian Union on September 17, 1948, a year after the country’s independence.

OFBJP-US president Dr. Adapa Prasad said that OFBJP is organizing Telangana Liberations in 10 cities across the USA. Former OFBJP President Krishna Reddy Anugula said that it is heartening to know that Home minister promised to celebrate Telangana Liberation day officially when BJP comes to power in 2023 in Telangana.

American Telugu Association secretary Sarath Vemula questioned said that Telenagna govt should recognize the sacrifices of the martyrs and celebrate the day officially.

ATA leaders Ram Vemula, Raghu Reddy also spoke on the occasion. Santosh Lingala demanded Telangana Govt to celebrate the day. Pradeep hoped that Telangana history would be part of the text books. Vamshi reminded the sacrifices made by the Telangana sons and daughters.

The overseas friends of BJP has been demanding official celebrations for a long time but successive Congress and Telugu Desam governments turned down the demand on the ground that this could create communal tension since the Muslim community has reservations on the issue.

The TRS government has decided not to officially celebrate and follow the stance of previous Congress and Telugu Desam governments in undivided Andhra Pradesh. On this day in 1948, the Indian Army marched into the princely state of Hyderabad, headed by Nizam VII Mir Osman Ali Khan, and the state was merged with the Indian Union.